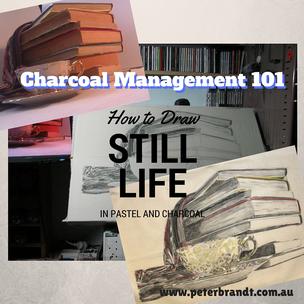 Someone has asked for some advice on how to tackle a still life assignment. Since this is my first ever attempt at telling, and showing, someone how to do anything even vaguely artistic, I hope you'll have patience with me. Be aware that I have no training whatsoever in imparting knowledge; and if you are being tutored elsewhere, please remember that satisfaction shall be rendered unto that tutor before me. After all, they have Qualifications. 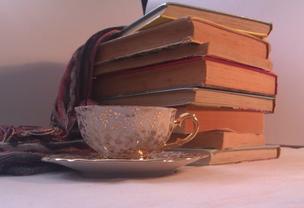 Here is the still life photo sent by an art student for help with an assignment. I recorded myself mumbling whatever came into my head as I did this drawing, then transcribed it and made it into something (hopefully) a little more coherent. The drawing took about an hour to complete, and every five minutes or so I photographed its progress. It was done on a drawing stand that is roughly shoulder height (to me), which allows great freedom of shoulder movement. My drawing surface is, as usual, raw calico, gently stretched across a stretched, primed canvas. This allows a nice amount of even, springy "give" in the surface, which makes the charcoal much more easily controllable. The drawing area is roughly 500 x 700mm, or 20" x 28". I used soft charcoal in peelable pencil form by General Pencil, as mentioned below in an earlier post. 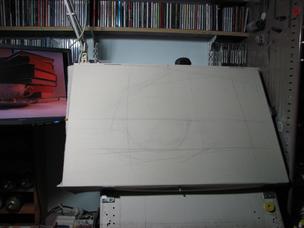 Since this is not a drafting lesson, I'm not going into any details about how to draw what you see, and some of the tricks you can use to achieve that. (Incidentally, I encourage the use of tricks wherever possible; as long as you're drawing, you're getting better at it. Eventually you'll surprise yourself that you can do it even without the tricks). This is basically about charcoal management. That said, first, you lay down your proportions, followed by some construction lines. I have used a 5b pencil, and done them a bit too heavily so they are more easily seen. 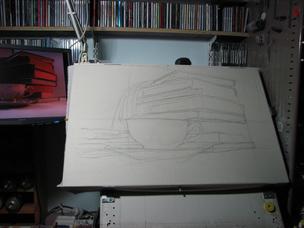 The next step is to draw in your outlines, still using the pencil. Here I try to concentrate on the object I am drawing, rather than how it appears. I may, for instance, draw lines that I know are there, even though they can't be seen in the photo. 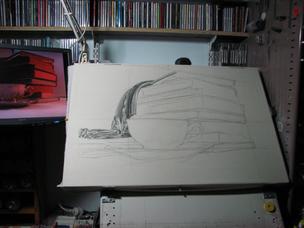 Once I start in charcoal I stop thinking about lines and objects, and think in tonal differences instead. Try to draw what you see, rather than what you think is there. It might look odd while you're working, but you may be surprised when you see the finished work. Don't try to put too much detail in; feel free to exercise the viewer's imagination. 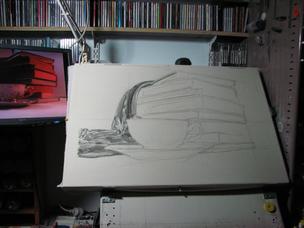 I like to work diagonally down from top left (I am right-handed). That way I can often pick up missed details, and if I use my little finger to support and guide my hand, it won't be smudging anything. However, I'll also try to complete one visual component at a time (in this case, the scarf), so my tonal values are consistent. There can be conflict between these two approaches, but hey, we all need a little tension in our lives. 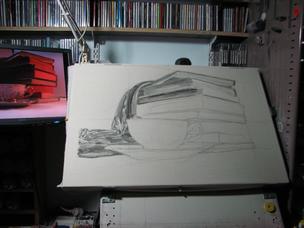 And so onto the books. For large works like this I think it's important to draw from the shoulder. Try not to use the elbow, and the wrist should be used only for little flicks of the pencil, where required. drawing from the shoulder ensures even pressure, straight lines, and smooth curves. 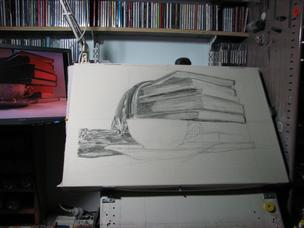 I prefer to work with a light touch. Too little charcoal can easily be added to at the end, when you look at the finished drawing. For heavier lines again I try to be economical. Better to have one heavy line, if luck and skill will combine to put it in the right place, rather than trying to knit several attempts into one Frankenstein's Line. You know what they can be like. 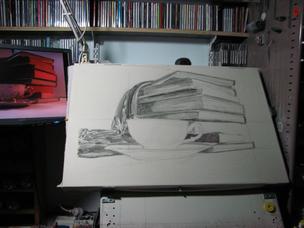 Personally I don't like smudging or rubbing back my charcoal to get a smooth area (unless it means rubbing over the charcoal with a lighter pastel, but that's for colour as much as smoothness). As I always favour soft charcoal, working on unprimed fabric, and on a slightly springy surface, certainly covers up much ham-fistedness (or shoulderedness) on my part. Harder charcoals on textured paper are much more forgiving. 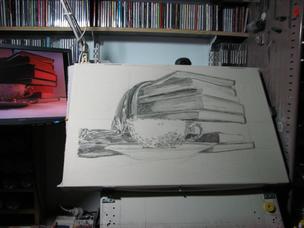 For the teacup (and I think it's the first teacup I've ever drawn, which probably explains a bit), I'm not trying to capture any detail of the pattern, though it's best to bear in mind that what I draw here determines how successfully its going to look three dimensional. 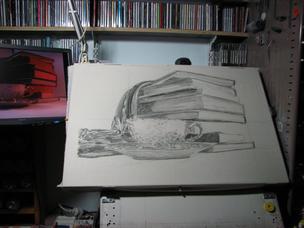 A little more shading on the cup, and the saucer is given some depth. When you're drawing, I think it's alright to invent your own tonal differences, either to pick out, or suppress, details; or to break up the composition, as you see fit. For example, the stack of books might not be quite as it seems in the photo, but it's still a pretty good stack of books. 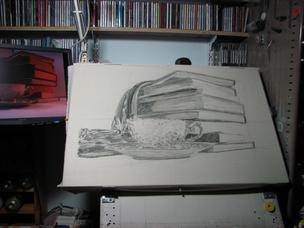 Now some fine detailing (using the charcoal's edge) on the teacup, brings the purely charcoal phase of the drawing to a close. I haven't smudged anything, or rubbed anything back. But, being on an off-white background, I want to put some highlights in. And since this is my website, I will. 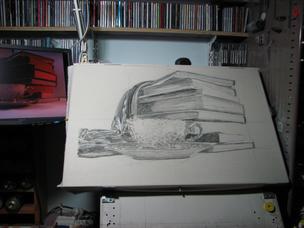 I use a white soft pastel stick by Gallery Mungyo, which seems to be the best at not disappearing completely when it gets fixed. The highlights here, on the scarf and the books, are quite subtle; these things are not, after all, shiny. 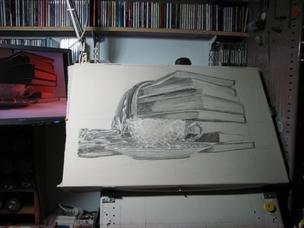 The teacup, however, is; and so it receives a heavier treatment. And this stage marks the completion of the Charcoal With Highlights stage. And yet, I still want more. 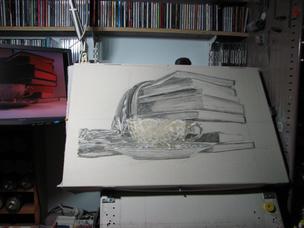 A little ochre (Faber Castell #184) lightly laid on the surface, and over the top of the charcoal where necessary, gives a satisfactory gold effect. And I could well leave it there. The gold accent is nice. 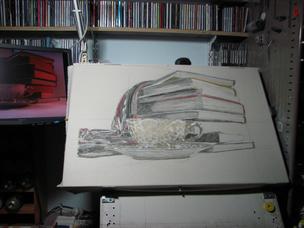 But I just had to get carried away. A little scarlet lake (118) and some more ochre, and this time I'll definitely leave it alone. I fix the whole surface area, not just where I've drawn, as the fixative does slightly affect the colour of the calico, as well as its stretchiness. Allow to dry. 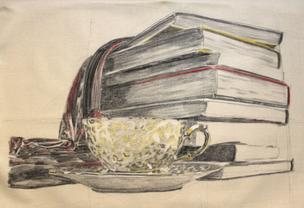 Still Life, for twistedbutperfect. This has been an evening of my life; thank you for being a part of it.